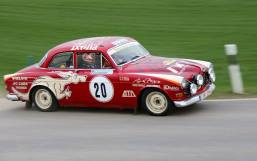 As announced elsewhere, the 2017 edition will be run as a « candidate event » for the integration of the rally into the « FIA TROPHY FOR HISTORIC REGULARITY RALLIES » from the 2018 season. The novelty of the year will probably be the arrival of a second series of RTs and a new city « Etape » for Friday’s program.

The rally keeps its profile spread over two days, with a prologue on Friday evening May 12 and a program full on Saturday, May 13. After the 2 different RT’s of the Prologue, Saturday offers competitors 10 RT’s. From sprints of 4 kms hardly, going through circuits offering more than 20 kms timed, up to straight tests touching 15 kms, the program will be varied and selective. The project provides 10 different RT’s, only for the RT’s of the last loop two unchanged passages are expected.

As usual, the BOUCLES DE CLERVAUX, which are also supported by the tourist authorities of the Grand Duchy of Luxembourg (moderate commitment fees oblige) will offer on their connecting routes routes that perfectly represent the charm of our  » Éisleck ».
The route of the rally is reworked considerably and the participants will have the opportunity to visit the canton of Diekirch, Lake Haute-Sûre while integrating tests of regularity that take care of the sporting image of the BOUCLES DE CLERVAUX.

A 2017 edition, which can be considered a bit like the end of the adolescence of the Rally.